Would You Rather: Wear Dirty Underwear, Or Go Without? 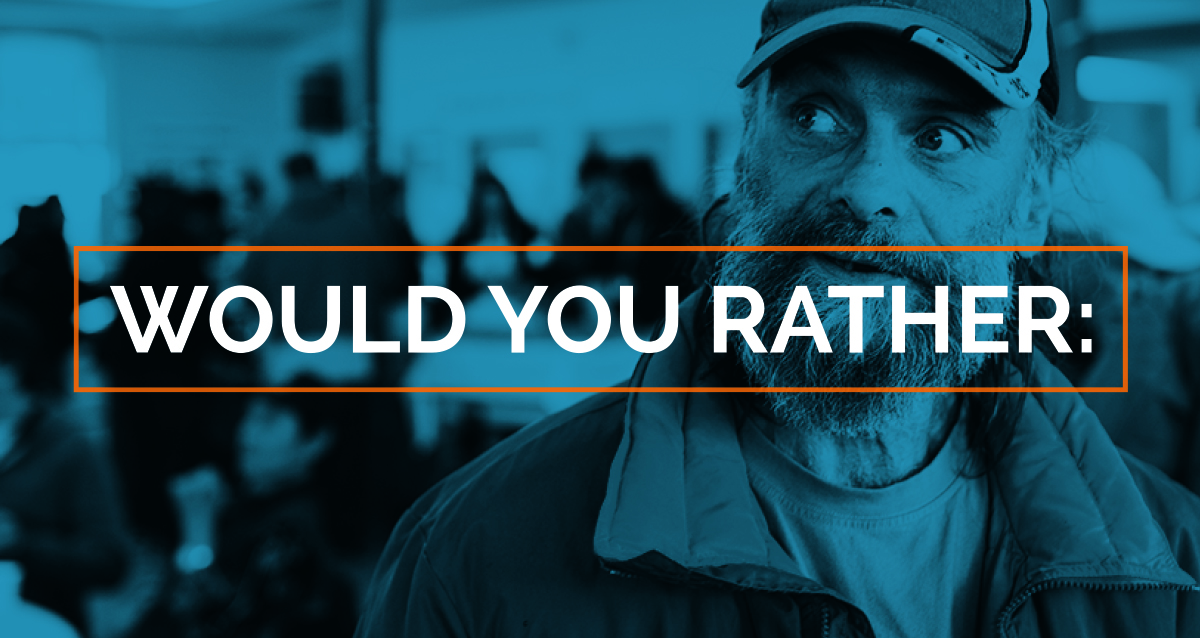 …Sadly, this is a decision people experiencing homelessness have to make every single day.

For people who are homeless in Edmonton, gaining access to new, clean underwear is difficult. Some individuals may wear the same pair of underwear for months at a time, and some may go without underwear for just as long. Homeless underwear issues are something we don’t often consider but can be a serious problem for those in the community.

Underwear is one of the most requested items by the people who use Bissell Centre services, but one of the least donated items.

“It doesn’t feel comfortable when you’re not wearing any underwear, and no one likes to put dirty underwear back on after a shower. Women have accidents; they need access to clean undergarments.” – Angie

So, let’s pass the question on to you. Would you rather wear dirty underwear, or go without?

Let’s weigh each of the options:

Wearing dirty underwear may not seem like a big deal at first, but as the weeks pass, bacteria and microbes will accumulate causing an embarrassing odour, irritating rash, and infection on your skin down there!

If you’re a woman and you have a leak or accident during that time of the month, you’ll have no choice but to continue wearing the dirtied underwear, which can contribute to even more bacteria and microbe growth.

Not to mention, after you shower and get all squeaky clean, you won’t have a fresh pair of undies to slip into and will have to pop on the smelly, old, bacteria-ridden pair.

Going without underwear sounds fun —“freeing” even —but what happens when the inevitable chafing and skin irritation come along with it? You’ll have to deal with that gnarly skin rash for weeks on end!

Without the barrier of underwear, there’s a higher risk for foreign bacteria to make contact with your skin. Among other issues, there’s also a greater chance of fungi development because your underwear isn’t there to absorb your sweat.

Wearing underwear is something that we often take for granted, but when faced with a decision like this, it is easy to see why clean underwear is so important to those who don’t always have access to it.

When a person is homeless, underwear issues can contribute to a multitude of larger health problems and discomfort. For many people, especially homeless populations, the availability of fresh, clean underwear makes all the difference.

This is why we created our #DropYourGonch campaign: so that no one in our community would have to make the decision between wearing dirty underwear, or going without.

The Drop Your Gonch campaign aims to fill gaps in the Bissell Centre community closet by reaching out to our supporters to help stock it full of new underwear for those who are homeless.

The clean underwear donated by our supporters helps to provide our community with better personal health and hygiene, and a restored sense of dignity and self-worth.