From the Street to School – Mike’s Story 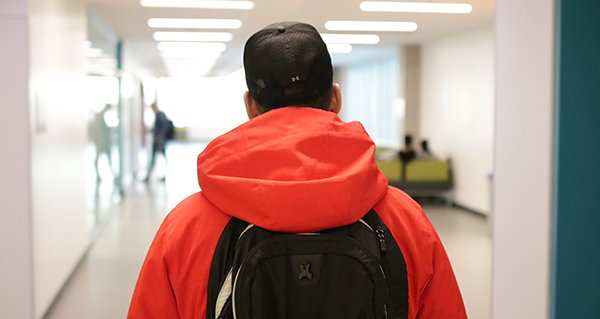 When Mike first came to Bissell Centre, he’d been living on the street for two years. You might have even seen him on the streets of Edmonton. Perhaps you were the woman who looked Mike in the eyes and said, “You need to get yourself help. There are resources to help you.”

Mike grew up in Edmonton in a family of eight. It wasn’t easy growing up in such a big family. They lived in a cramped three-bedroom house, made smaller because his mother was a hoarder, and his parents fought often.

Mike was similar to his father. He was trusting. He always saw the best in people, giving them the benefit of the doubt. If you asked, he’d give you the shirt from his back.

Once he turned 18, Mike worked and lived on his own, at times allowing his siblings, even his mother, to live with him when they struggled to get by.

Eventually, he made the journey from Edmonton to Calgary. There, he worked for years in the construction industry. Unfortunately, his business partner wasn’t trustworthy—he was underpaying and stealing work from Mike.

During this chaotic time, Mike lost his father, and it was like all the air was sucked from his lungs. The loss was devastating. With his life in shambles, he decided to return home.

Sadly, he didn’t receive the help he’d hoped to find back home. That’s when Mike became homeless for the first time. Each day was a constant struggle. No one believed in him and he certainly didn’t believe in himself.

“Give people a reason to believe in themselves again and see what they do with their lives.”

One day, a kind woman approached him on the street, and encouraged him to seek help. That was a life-changing moment for Mike. He began thinking that things could be different.

Mike found his way to Bissell Centre, where he finally got the help he needed. Scona High School had recently raised $115,000 for Bissell Centre, enabling them to form an Outreach Housing Team. Mike became their first ever participant!

With support from the new team, Mike found an affordable apartment, and got access to mental health services. He also found a rewarding sales job. He was so skilled that he soon won top sales awards and he continues to work there today.

Mike is also now working toward a business degree and is set to graduate at the end of this semester! He dreams of working with wood—he loves building things with his hands.

Donors like you have made it possible for Mike to access Bissell Centre’s Outreach Housing Team, along with other resources. Thanks to your support, Mike has moved from poverty to prosperity.

Thank you for helping Mike and others like him to find affordable housing, and step into a brighter future!

Mike story is a feature in our May Newsletter. Read the full newsletter online now.