Walking the Walk – One Man’s Mission to Help Vulnerable Edmontonians 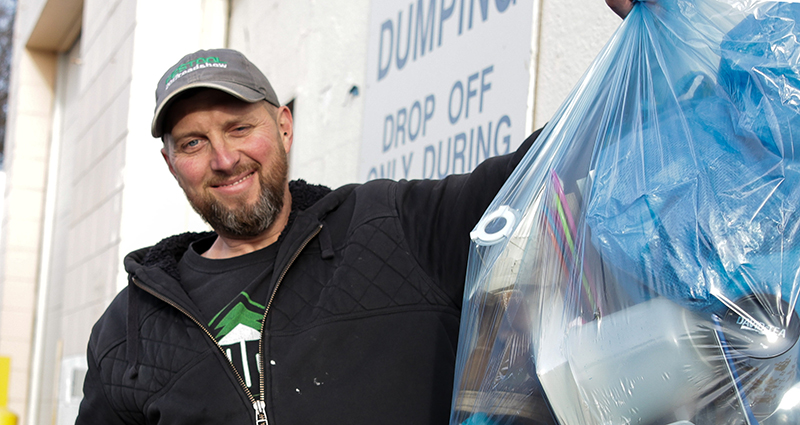 Josh Hudon, father and business owner, is humble about his achievements, but his collection of 1000 bags for Bissell Centre is anything but a humble feat. He working tirelessly over 9 months to collect the bags, mobilizing a large network to get the job done. The drive and passion to collect the 1000 bags stemmed from a time where he was experiencing financial hardships and could have lost his house and his business.

“It got me thinking about the homeless situation in Edmonton I wanted to do something to help,” explains Josh. “You don’t normally think about homelessness until it really affects you, and that’s what happened to me.”

“You don’t normally think about homelessness until it really affects you.”

Another thing that inspired his momentous clothing drive was his participation in the Coldest Night of the Year national fundraising walk last winter. Experiencing firsthand the cold of a winter walk in the dark gave him a deeper empathy for individuals experiencing homelessness in Edmonton and he wanted to do something more to help.

Josh worked closely with his sister to collect and transport the bags a two dozen at a time and met several supporters throughout the campaign who helped him reach his goal. After landing some media opportunities in the fall, bags really began to pour in. On November 19th, 2018, Josh dropped off his 1000th bag.

And he’s not stopping there.

Shortly after collecting “#1000bagsforBissell,” Josh and his friends entered as a team for the Coldest Night of the Year again, with sights set high. Josh’s team hopes to raise $60,000 for Bissell Centre as they participate in the walk. They are already well on their way to achieving this ambitious goal. At the time of writing, Josh’s team is the top fundraising team in Canada for the Coldest Night of the Year, having already raised $14,178.

When asked if he had any advice for teams looking to step up their fundraising efforts, Josh suggested being creative. He has hosted two silent auctions, sold raffle tickets for a large basket giveaway, and reached out to his network for corporate sponsorships. He also recommends dreaming big.

“No one has ever accomplished anything great by setting small, easily achievable goals—you need to reach higher than you might think possible,” explains Josh. He has high expectations of himself, and his drive and ambition are what help him accomplish his mountainous goals.

Or, start your own team