Russell’s Story of Hope and Renewal 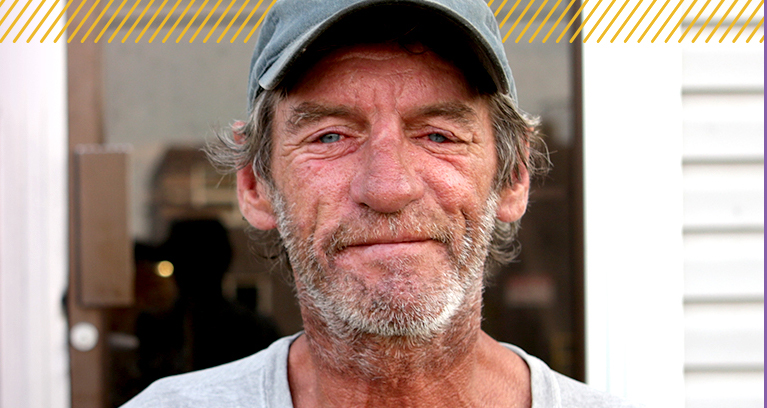 When Russell came to us, he had been sleeping under trees, struggling to find work. After spending a decade stuck in a cycle of addiction and poverty, he knew it was time to make a change.

Life had not been easy for Russell. As a child growing up in a family of eight, he recalls getting teased because of his hand-me-downs and for the holes in his clothes. Food was limited, as his dad worked to support six children. As a teen, Russell was incredibly talented at baseball—it was something he could have pursued as a career. But his family just didn’t have the money to support his dream.

As an adult, Russell lived and worked in Fort McMurray with his wife. However, times became difficult when his relationship came to an end. He sold his house and moved to Edmonton where he struggled to find work and a place to live. Unable to cope with the past and deal with his current situation, Russell turned to alcohol to numb his pain. For the next 10 years, homelessness became a way of life for Russell as he struggled with addiction and loneliness. Russell recalls the most difficult part of living on the streets was being so isolated: “There was nobody. Just me.”

There was nobody. Just me.

One day, Russell saw someone in coveralls heading to work and asked them where he could go to find a job. That’s when he first heard about Bissell Centre. He quickly reached out for help. Although overcoming his addiction wasn’t easy, with Bissell Centre’s help, Russell managed to find and maintain steady work as a landscaper. Today, he still works for the same company after nine years of employment.

Our generous donors have directly impacted people like Russell, and for that he is so grateful. “It gives me the opportunity to start growing up like a tree,” he shares. “Look at me, I’m 100% happy!”

Not only did a steady income give Russell the confidence to sustain a livelihood, the housing program helped him to find a home and a family. “I know when I’m coming home, I’m coming home,” shares Russell. He is so grateful to have security and to be leading a dignified life—a life of growth and transformation that he hopes can spread to others who are struggling.

“I can get up and put a cup of coffee on and I go up there in the cupboard to get something to eat,” he says. “I don’t have to stand in line-ups.”

As the season of gratitude approaches, Russell looks forward to sharing his gratitude at Bissell Centre’s Thanksgiving dinner. He reminisces about how wonderful it was to be a part of something when he was feeling alone.

“Everything looked so perfect—from the cloths on the tables to the flowers in the pots,” he says. “It was so well organized and well done.” It is these meals that are often the first steps towards growth and transformation for those who are struggling.

Like Russell, we are so incredibly grateful for your gifts that have supported so many people throughout the years. Thank you for supporting our programs that have done so much for our Edmonton community!