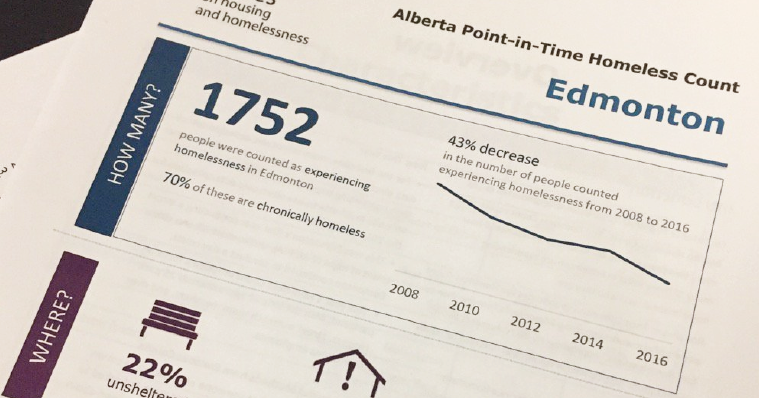 “We need to be careful about using anecdotal evidence to dismiss the validity of the homeless count,” says Gary St. Amand, CEO of Bissell Centre.

The most recent survey and data analysis estimate that the number of people who are homeless in our city has decreased from 2,307 people in 2014 to 1,752 people currently.

“The homeless count is meant only to be one snapshot of homelessness and while we need to be reflective about its methodology, it is also important that we consider all the evidence before jumping to sweeping conclusions about its accuracy,” explains St. Amand.

For example, Bissell Centre has supported over 1,500 individuals and families since the last homeless count in 2014 through its housing and eviction prevention work. The organization has assisted 545 people to find housing and 1,009 people to avoid imminent evictions.

“Further to that, while we have experienced a rise in the usage of our services since the last homeless count, our data has shown that this was the result of new services that we implemented during that period,” explains St. Amand. “These new services connected us with people who are new to Bissell Centre and they capture the majority of the increased service use throughout our organization.”

Another consideration is the forced relocation of homeless people due to the recent significant development of Edmonton’s downtown core. When coupled with the seasonal increase of people sleeping outdoors in the summer months, a rise in the number of homeless people in various locations around the city, including the river valley, is to be expected.

This raises the question of whether the rise in numbers in certain locations is due to the movement of homeless people rather than a net increase of the homeless population in Edmonton, as some have argued.

“To call into doubt the methodology of the homeless count without a thorough and thoughtful review of the evidence diminishes the good work that is happening by many organizations and individuals in the community,” says St. Amand.

“We need to maintain our focus on housing, because whatever your view of the housing count is, we still have over 1,700 people living on the streets and that should be unacceptable to all of us. We need to continue to work together as a community to bring long-term solutions to this issue,” says St. Amand.