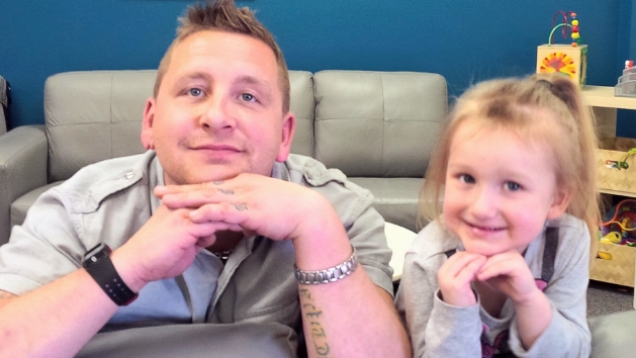 It’s hard enough being a single dad, but it’s even harder when you struggle with poverty and periodic homelessness. The idea seems unthinkable, but it’s a reality that many dads in our community must face every day.

One of those dads is Ché, a single father who has faced more than his fair share of troubles. His past struggles with alcohol addiction leading to crime and temporary homelessness left him feeling hopeless.  “I’ve been at the bottom many times,” he says, “and it was pretty much my baby girl who was my saving grace.”

Ché recently reconnected with his four-year-old daughter, who is currently living in foster care. “The first time she called me Daddy, I melted,” he says. “When I hear her yell, â€˜Daddy, come help meâ€¦’ I know that’s my purpose.”

While still in the midst of his struggle with addiction and poverty a number of years ago, Ché accessed Bissell Centre’s Employment Services. With the help of our dedicated support workers, he was able to complete his tickets and secure the employment he needed to get himself off the streets for good.

Since then, Ché has gotten sober, secured a place to live, completed his high school diploma, and enrolled in college in pursuit of an Addictions and Community Services Worker diploma. He has plans to pursue his Master’s degree in the future.

Ché has also started an initiative for a support group for men getting out of prison and re-integrating into the community, an endeavour that he began working on while he himself was still incarcerated. “This is a group for guys getting out and getting back into the community,” he says. “I know from the past that it’s hard to find people to relate, hard to get people to listen.”

Ché ’s group, Second Chance Fellowship, is still in the early stages of development and is not yet meeting regularly. However, Ché is excited for it to get off the ground.  “Besides my daughter, this is the biggest accomplishment of my life.”

Ché has already been granted guardianship of his daughter, but his living situation stops him from being able to take full custody. His biggest challenge has been finding a suitable and affordable home in which to raise his child. “If I go up to [the foster care workers] and say, â€˜I’m ready to take her,’ they’re gonna want to see where I live. How can I do that when I don’t have a two-bedroom place?” Ché hopes that when he completes his diploma and finds steady employment, he will find an affordable two-bedroom apartment in no time, finally allowing him to be a full-time dad.

The transformative power that Ché ’s daughter has had on his life is evident. Even though there was a time when alcohol controlled his life, Ché knows that, now that he’s sober, he won’t ever fall off the wagon again. He explains his reason for staying sober as though it were the most obvious thing in the world: “I can’t break my little girl’s heart, right?”