Davina and Shawn’s Story of Renewal 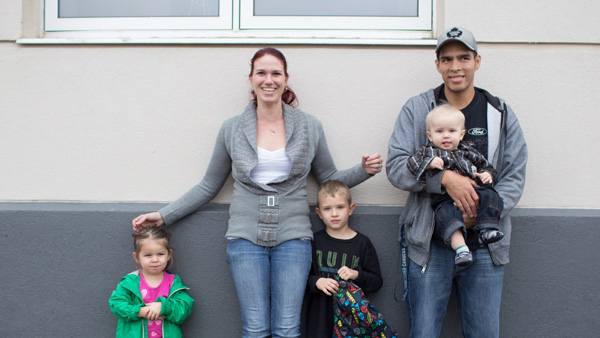 ← Back to Campaign Page

Not many people had a longer or colder winter than Davina and Shawn, two Edmontonians who say that Bissell Centre helped them get their lives turned around. Both have struggled with poverty, homelessness, and addiction for much of their adult lives.

Shawn and Davina were married in the summer of 2016, six years after meeting each other for the first time at an AA meeting. Their earliest days together were difficult, as both were living on a low income while trying to overcome their issues with addiction. After they’d been living together for a while, they were overjoyed to discover that Davina was pregnant–but their joy would be short-lived. “We ended up losing the baby,” says Shawn. “That was really hard.” Shawn and Davina suffered a relapse shortly afterward that lasted months. Davina knew that they needed to change their lifestyle if they wanted to make a home for Noah, her two-year-old son from a previous relationship. “We cleaned up,” she says. “We weren’t sure if we were going to make it.” Davina decided to enter a one-year treatment program for her addiction.

Shawn’s and Davina’s health began to improve, and before long, Davina was pregnant again. “But then,” says Shawn, “The cops came knocking on my door one day and arrested me.” Shawn was detained for a past infraction, and ended up serving several months in the penitentiary in Vancouver. “At my worst, I used to do a lot of bad stuff,” he explained. “The past [came] back to haunt me.” Shawn was flown out of Edmonton to serve his sentence, leaving Davina, pregnant and still undergoing treatment, alone. “It was hard,” says Davina. “It was really hard. Being in treatment and writing letters [to Shawn] and being pregnant. And then, not having anywhere to go after treatment.”

Many times, says Davina, living with poverty and addiction has made her feel “like the scum of society.” “I felt like, here’s the normal people, and then here’s me,” she says. “I didn’t really trust. I felt like I was looked down upon, like I was judged.” Bissell Centre was what helped Davina take the first few steps away from her old life. After her daughter was born, Davina brought her to Bissell Centre’s daycare for the first time. “The staff were so supportive,” she says. “I’ve shared my history with [them], and there were no judgements at all. It was open arms. Like, we’re so glad to be able to help you.”

“The staff were so supportive. I’ve shared my history with [Bissell Centre] and there were no judgements at all. It was open arms. Like, we’re so glad to be able to help you.”

The daycare service made a world of difference to Davina and Shawn. “We were able to go to [AA] meetings,” says Davina. “That was huge. And we were able to do counselling, make appointments I got to finish treatment” Shawn cuts in, “We got to put our lives back together.”

The daycare program has even allowed Davina to return to school, where she is pursuing her Bachelor’s degree in sociology. “Fatima gives me two days a week so that I can do my schooling during the day,” says Davina. “She gives me extra time if I need to write a paper or study for an exam. And that has helped a lot. I don’t know what I’d do without Fatima.” Shawn adds, “It takes you from a place where you don’t really trust anybody to a place where you can believe in people again.”

Of course, things are still far from perfect for Davina and Shawn and their growing family. Although Shawn is thankful to have a steady source of income, his camp job takes him out of town for weeks at a time, leaving Davina alone much of the time to take care of their children. It will get easier, says Davina, once the kids are old enough to go to school. But for now, Davina and Shawn will have to do what they’ve always done: carry on together.