From Needing Help to Helping Others – Roger’s Inspiring Story 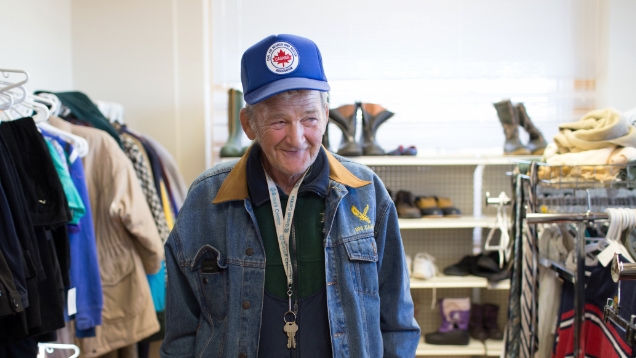 “I’m either Dad, Uncle, or Grandpa around here.” That is the way that Roger, a long time Bissell Centre volunteer, likes to introduce himself around the community. As he puts it, “I’ve got around two hundred street sons and daughters, and about five hundred street grandchildren.” To many community members and visitors to Bissell, Roger is more than a trusted friend – he’s practically part of the family.

Roger has a stocky build, iron gray hair that is nearly white around the temples, and a ready smile that creases his face with little provocation. He has been volunteering for Bissell Centre for over two years, but before that, he was a regular visitor to our Drop-in Centre. “I used to come here for coffee and that on the weekends, and one day they asked me if I wanted to volunteer for the Community Closet. I said, yes I would!”

Before he became a volunteer, Roger’s life was not without its share of troubles. “I lost a sister and a niece to an impaired driver,” he says. “And I lost a granddaughter to an impaired driver. And I got no use for that, people coming too close to kids when they’re drinking.” In the past, Roger has also struggled with homelessness and poverty, going back and forth between temporary homes before he at last got a place of his own in the inner city. Now that Roger has a reliable place to live, he devotes most of his free time to helping others in need.

Roger’s desire for helping others was what drove him to start volunteering at Bissell Centre, offering support and assistance to people who now struggle with the same difficult circumstances that he once faced.

When he’s not at Bissell, Roger is also involved in a volunteer street patrol. All of his volunteer work keeps him busy, but Roger shows no signs of slowing down. “I’m coming up on sixty-seven years old,” he says, laughing, “but I don’t think I’ll retire until I’m about one hundred and eight.”

It is truly an inspiration to see someone like Roger, who has witnessed far more than his fair share of tragedy and personal struggles over the course of his life, devote himself so completely to improving the circumstances in his community.

We are proud to call Roger part of our Bissell Centre family.